Showing posts from November, 2012
Show All

By Geek II - November 27, 2012
Today we have done Storage Spaces recovery of a live data using a prototype of ReclaiMe Storage Spaces Recovery. Most likely we are the first in the world who were able to do this. Our client has a computer consisting of 5 hard disks on which he created Storage Spaces volumes - parity, simple and mirror. A month later the pool failed and the client lost the whole archive of family photos. He asked Microsoft to help, but it didn't bring any good. Then he found us and we decided to try to test our prototype on a real thing. The prototype gave good results both in recovery quality and in performance. Recovery took about two days on the computer with two processors and 6 GB memory. So, we congratulate ourselves and the client on the world's first successful Storage Spaces recovery.
Post a comment
Read more

By Geek II - November 18, 2012
In PCPro magazine, January 2013, in the article "Getting it taped", they describe the current state of tape drives and the data storage devices using them. All would be well but the article illustration that is quite weird - it would be logical to see these tape drives, however, instead of this the readers are offered a typical NAS device. More than that, while inspecting in detail this NAS that claims to be Tandberg DPS 2000, I found out that it is like two peas similar to a four bay QNAP device. So, go for the original - buy QNAP.
Post a comment
Read more

By Geek II - November 12, 2012
At this moment, the situation with the software prototype is as follows: S can and analysis of four 2 TB disks on the machine with two CPUs take a day to complete and require 6 GB of memory. Adding two more processors can probably speed the process by the factor of 1.5. Although the prototype can successfully recover Storage Spaces configuration on small sized LUNs (approx. 16 GB per LUN), it yet cannot cope with the large LUNs. The prototype is capable of recovering only Storage Spaces volumes with NTFS; as for ReFS, this is still to be implemented.
Post a comment
Read more 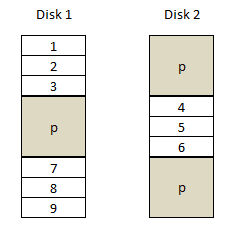 When recovering data from a client's NETGEAR ReadyNAS device we saw a rather strange layout - RAID5 of two disks, which appeared once ReclaiMe File Recovery has processed md-raid records. After looking at it for a while we realized that this is, surprisingly, possible given that we ignore the requirement of a minimum number of disks. So let's see what happens when placing data and parity blocks on two disks in a RAID5 layout where a stripe contains, say, three sectors: Now let's see what are there in the parity blocks in such a layout? In order to get an even row of two elements it is needed that all the elements would be the same, so the content of the parity block is the same as the content of its corresponding data block. Therefore we deal with a typical RAID1 (mirror) layout. Despite all the wildness of the layout, it meets all the basic criteria of a RAID5: survives a single disk failure, the disk space overhead equals to the capacity of one member disk.
2 comments
Read more
More posts